Yesterday was my first day properly back on the wagon and it went quite well actually!

I started the morning with a Starbucks Via their instant coffee *shudder* I was pleasantly surprised, it's really great, very smooth and coffee-y, just how I like it :D It's pretty useful for the mornings that I sleep in and don't have time for a real coffee, I'll definitely be re-stocking.

For breakfast I had some homemade Easiyo probiotic yogurt with a Graze pack - Bakewell Tart: cranberries, cherry raisins and almonds 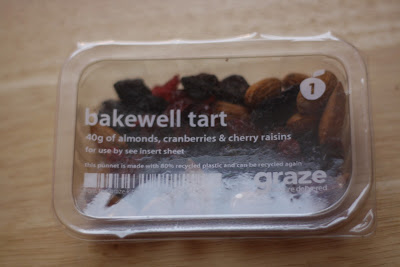 It was OK, nothing special! 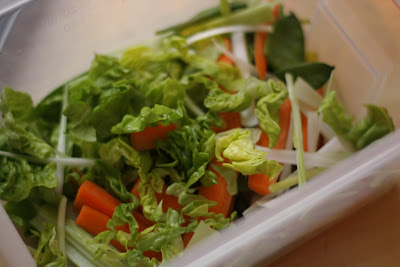 Topped with a tuna steak 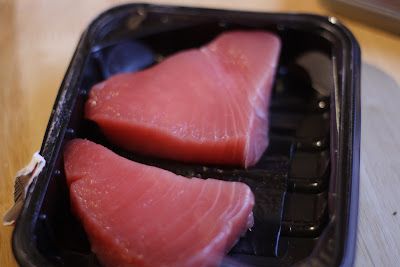 I steamed the tuna with a lime and coriander marinade from Nando's - I used microwave steam bags so it only took 2 minutes and was cooked perfectly! So soft and full of flavour! I used fresh tuna but you can use the bags with frozen fish which I'll be doing from now on to save some money! The steam bags are great but could get a bit expensive :(

I followed my salad with some greengages, and coffee.

When I got home I had another delivery from Graze and snacked on some honey cashews for some gym fuel - I had a 1 hour spin class booked and Oh. My. God. It was bloody hard work! I peaked too soon by working too hard in the beginning so really struggled to get through the second half! It was a brilliant workout - I can't believe I hadn't been in so long, I hope to make this a regular feature again. I stopped going because they changed the instructor and she was a bit crap. I was pretty disappointed when I saw it was still the same one - but she has totally changed her style and it turned out to be a fantastic workout!


For dinner I had my favourite - Pad Thai! (click for proper recipe!) I kind of ruined it though as I used too much lime and soba noodles instead of the usual medium egg noodles, which was weird! I ended up throwing on a good amount of soy sauce to help distract from the lime flavour, was nice, just not what I wanted - I'll need to make another later in the week :D


I also want to clarify, although I have said I am doing Weight Watchers for a while (at least 1 month) nothing is going to change other than counting points instead of counting calories - I'll still be eating all the same foods and doing the same sort of exercise as I was before. I just want a change from counting calories and worrying about protein and carbs - I already know what foods and what balance makes me feel good so I don't need to keep going over the numbers in such detail anymore, I know that on weight training days I benefit from more protein for recovery, I know too many carbs make me feel sleepy and drained. I just need to watch how much I eat because I do still want to lose a few pounds - not too much though.