Morning Blogland! Sorry I didn't get round to posting last night, I had a dinner fail so had to cook a second one and I spent too long playing Just Dance 2 on the Wii!
Just Dance is so much fun! I have zero coordination and I definitely can't dance, but it really doesn't matter! The graphics for the songs are pretty cool and absolutely hilarious, I just watched a few without actually playing the game because I was laughing so hard. Menus are really simple and it's easy to find your way around and loading times are reasonably quick. Song list is excellent I think, wide variety and something for everyone. You can also download more tracks from WiiWare which is a great feature - I have Singstar for the PS3 and have downloaded loads of extra tracks for that. Rather than buying a new game I can spend the same amount downloading exactly what I want. I may need to see if there is any Lady Gaga available to download! 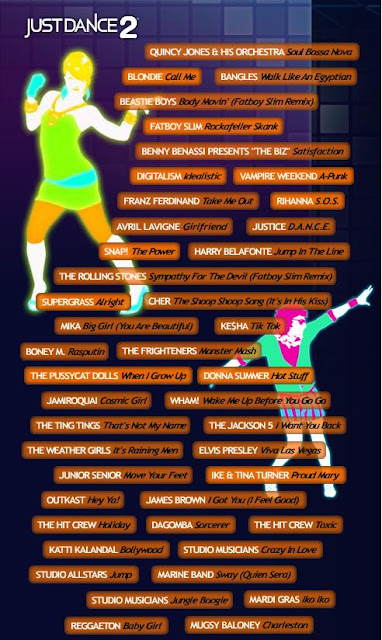 Image from here
I only properly looked at the Just Dance mode last night, but there is also a Battle Mode (I think that's what it was called), where you can have up to 8 players, and a Just Sweat mode for using the game as exercise - I think this is going to be the mode I will mostly use. It's great exercise and a lot of the routines are quite aerobics-y and each song has a sweat rating and difficulty rating. If you are hopelessly uncoordinated like me you may find some of the moves quite difficult to get right - but it really doesn't matter.
In Sweat Mode you can set yourself up a plan for how many songs you want to achieve each day or week and there's a sweat meter as well to give you a rough idea of calories burned.
The only kit you need are the Wii (obviously) and a standard controller, no need for any add ons or the Wii Fit board. It picks up movements well, but it is still possible to just wave the controller around and score points - but what would be the point in that?
I have to say, having not tried any dance games other than the old PS2 ones with the roll up dance mat, it's not something I would have bought. When I got the email though and had look at the site and some of the videos I thought it would be a good laugh for girly nights in with some wine and cocktails, but now I have had a go I'm sure I will use it far more often for getting a bit of a sweat on instead of my Pump it Up dance/exercise DVD. I love that it's interactive and keeps track of your progress - but I am a bit of a numbers geek anyway!
My boyfriend is out tonight so I'll be trying out the Just Sweat mode and I have a couple of girls coming round at the beginning of next month so there may well be a drunken Just Dance session coming up!
♥ Stella
Posted by Samantha at 11:29